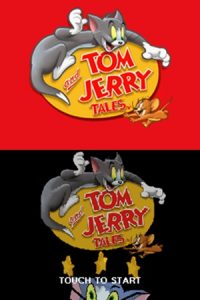 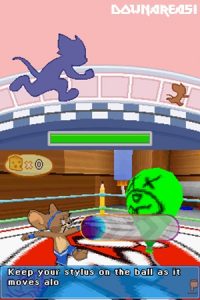 File Info
System : NDS
Best Emulator : Desmume
File Size : 15 MB
Game Info
Released : 2006
Genre : Puzzle , Arcade
Descriptions
TOM AND JERRY TALES NDS Rom –  is released in 2006 for NDS, and it’s also release for Gameboy Advance, But the graphics and the content is completely different. in Tom And Jerry Tales ,the player takes on the role of Jerry on a mission to defeat Tom and leave him a mess to clean up! Jerry starts at his mouse-hole and is offered a map to choose a level from. If the player is new to the game, he or she can play the tutorial level .
Each level has four game modes: Touch Time, Time, Speed and Break. Touch Time is the main game mode and what the player has to do is use the buttons to move Jerry around and use the stylus to touch the screen to make Jerry do his tricks. Time game mode tests how fast the player can reach the goals.
How to Play ?
File Download (DL)